Equinor ASA is a Norwegian multinational energy company headquartered in Stavanger, Norway. It is a petroleum and wind energy company with operations in thirty-six countries. Formerly known as Statoil ASA.

NOTES:
Equinor will sell a 50% non-op stake in its Empire Wind and Beacon Wind projects on the U.S. east coast to BP for $1.1 billion. The deal is meant as a foundation for a go-forward strategic partnership between the two firms to develop US offshore wind assets.
REGIONS:

NOTES:
Equinor has reached a deal with Russia's Rosneft to acquire a 49% position in twelve onshore E&P licenses across eastern Siberia for $550 million. The licenses include the North Danilovsky development, which is on pace to produce 40 Mbbl/d by 2024 and then expand to 70 Mblb/d.
REGIONS:

NOTES:
Equinor and Shell have bought Schlumberger's 49% stake in the Bandurria Sur onshore block of Argentina's Vaca Muerta Shale for $355 million. The block includes 56,000 gross acres and YPF is the operator with a 51% stake. Current production is 10 Mbbl/d.
REGIONS:

NOTES:
Equinor has entered into a deal with Repsol to sell their 63% interest and operatorship in the Eagle Ford Shale, which covers 69,000 net acres. This will boost Repsol's position in the basin to 100% for $325 million.
REGIONS:

BUYERS:
SELLERS:
DETAILS:
NOTES:
Repsol is acquiring a 20% non-op stake in the Monument prospect located in the Northwest Walker Ridge area of the Gulf of Mexico,
REGIONS:

BUYERS:
DETAILS:
NOTES:
Equinor has acquired a 50% stake in Argentina's largest offshore block, CAN 100, as part of its collaboration with YPF.
REGIONS:

NOTES:
Shell completed the sale of its 22.45% non-operated interest in the Caesar-Tonga asset in the Gulf of Mexico to Equinor for $965 million.
REGIONS:

NOTES:
Equinor spent $24.5 million for the Mississippi Canyon/801 block in the U.S. Gulf of Mexico.
REGIONS:

BUYERS:
SELLERS:
DETAILS:
NOTES:
DNO ASA reported the completion of the asset swap agreement between Equinor and Faroe Petroleum, DNO ASA's subsidiary, in which Faroe Petroleum's interests in the non-producing Njord and Hyme red redevelopment and Bauge development assets were exchanged for interests in four Equinor-held producing assets on a cashless basis.
REGIONS:

NOTES:
Equinor exercised its preferential rights to acquire an additional 22.45% interest in the Caesar Tonga oil field from Shell Offshore for $965 million, increasing its interest from 23.55% to 46.00%.
REGIONS:

NOTES:
Aker BP has acquired Equinor's 77.8% interest in the King Lear gas/condensate discovery in the Norwegian North Sea for $250 million. According to data from the Norwegian Petroleum Directorate, net recoverable resources in the King Lear discovery is roughly 77 MMboe. Aker BP estimates a total resource addition of more than 100 MMboe, including increased oil recovery potential from the Ula field.
REGIONS:

BUYERS:
SELLERS:
DETAILS:
NOTES:
Equinor will purchase Chevron's 40% operating interest in the Rosebank project, one of the largest undeveloped fields on the UK Continental Shelf.
REGIONS:

BUYERS:
SELLERS:
DETAILS:
NOTES:
Equinor has entered into a deal to lease a portion of TEXEGY's Austin Chalk minerals assets, making them the operator of a substantial portion of TEXEGY's holdings in the Burr Ferry Field of Vernon Parish, Louisiana.
REGIONS:

NOTES:
Statoil reported that once the acquisition of a 10% stake in the BM-S-8 Block from Queiroz Galvão Exploração e Produção closes, they will divest a 3.5% stake in the block to Exxon and a 3% stake to Galp for $250 million. Upon closing of this transaction, and several others, Statoil and Exxon will each own a 36.5% interest in the BM-S-8 Block and Galp will own 17%.
REGIONS:

NOTES:
ExxonMobil has entered into a deal to acquire half of Statoil's 66% interest in the BM-S-8 block of offshore Brazil for an upfront cash payment of $800 million and contingent payments of up to $500 million
REGIONS:

NEW YORK, Oct. 24, 2017 /PRNewswire/ -- Empire Wind is the project name selected by Statoil for the company's offshore wind site located off the southern coast of Long Island, New York.  The 79,350 acre site, secured by Statoil in a federal auction in December 2016, has the potential to generate up to 1GW of offshore wind power, making it a key part of New York State's plan to deploy renewable energy sources to meet the state's electricity needs.

Statoil (NYSE: STO) also announced the launch of the Empire Wind website www.empirewind.com where members of the public can obtain information on the project and register to receive updates.

Statoil is in the early stages of developing the offshore wind farm with the potential to provide New York City and Long Island with a significant, long-term source of renewable electricity.  The Empire Wind project team is currently conducting an extensive evaluation process, gathering detailed information about the seabed conditions, grid connection options and wind resources characteristic to the area.

New York's Clean Energy Standard mandates an increase in the share of renewables in its energy mix to 50 percent by 2030.  As part of that effort, Governor Andrew Cuomo recently called for the development of up to 2.4 gigawatts of offshore wind power by 2030.

"Statoil looks forward to working with all stakeholders as we move forward with the job of bringing offshore wind energy to New York," said Geijerstam of Statoil. "We are committed to working with other developers, state officials, unions and the business community to develop a U.S. supply chain for this and other offshore wind projects.  Our goal is to help make offshore wind a leading option for generating clean and affordable energy in New York."

Statoil currently has seven offshore wind projects online or under development in Europe, including the world's first floating offshore wind project in Scotland—a technology which could prove pivotal in generating offshore wind power for the U.S. west coast and Hawaii.  The company's offshore wind portfolio has the capacity of providing over one million European homes with renewable energy. Statoil also recently announced its first solar investment in the 162MW Apodi solar asset in Brazil which will provide approximately 160,000 households with electricity.

Statoil is an international energy company, with operations in more than 30 countries and approximately 20,000 employees worldwide.

We are headquartered in Norway and are listed on the New York and Oslo stock exchanges.

Statoil has extensive experience in the U.S. and is a significant player in the exploration and development of oil and gas in the Gulf of Mexico and from shale and tight rock formations throughout the mainland US.

Sample of a production chart 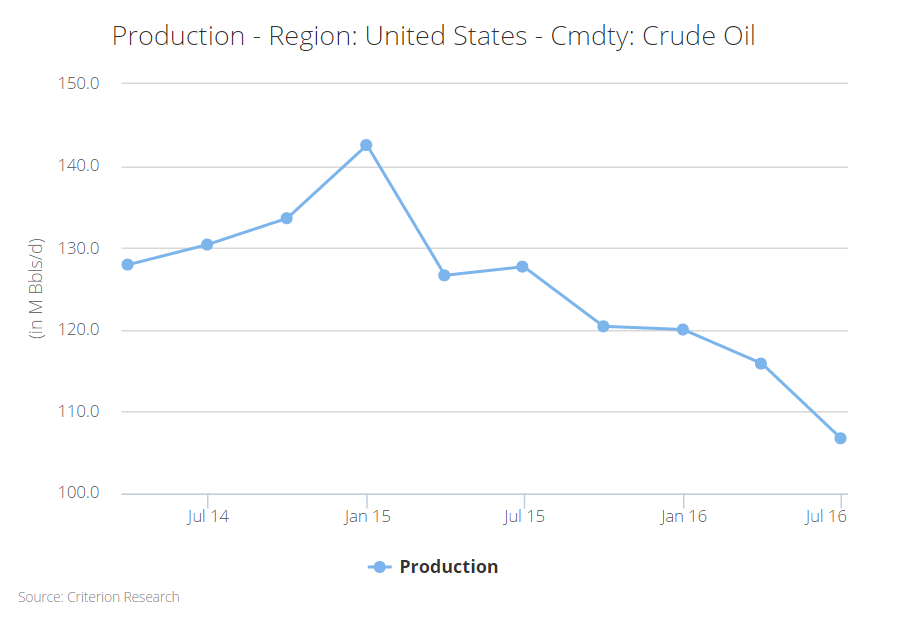