The European  Union is currently struggling to agree on a proposed natural gas price cap. A handful of countries oppose the cap over concerns it will make it harder to obtain supplies. On the other hand, other members see the cap as a way to protect consumers from price spikes.

Currently, the bloc is discussing a €220/cap which would only be implemented on prompt month TTF prices. TTF prices would also have to be at least €35/Mwh higher than LNG prices in the region for the cap to be implemented.

An additional meeting may occur on December 19th to hash everything out.

Gulf Run Transmission posted a notice of available firm capacity and bid solicitation for their new pipeline, which is scheduled to begin operations on December 15, 2022, pending FERC clearance.   They cited that "at in-service, Gulf Run’s Zone 1 will have 29 receipt meters capable of aggregating supply in Carthage, Haynesville and Perryville.  Zone 2 will initially have approximately 1.65 Bcf/d of new takeaway capacity to the Louisiana Gulf Coast." 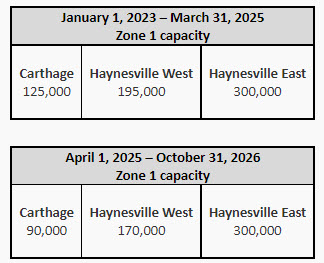 Take a few minutes to learn how a Criterion Research subscription will help save you time and money.